As a responsible corporate citizen, ReNew Power has been engaged in social responsibility since its inception in 2011. Till date, we have developed over 200 villages, impacting over 450,000 lives. Today, we are carving out a unique position in the development ecosystem to drive sustainable and scalable impact.

Through programmatic interventions aligned to the targets of Sustainable Development Goals along with renewable energy advocacy and thought leadership, ReNew Foundation aims to chalk out the next chapter of human development in India through clean energy.

To impact the lives of people through clean energy

To develop sustainable solutions in the area of renewable energy which focus on: 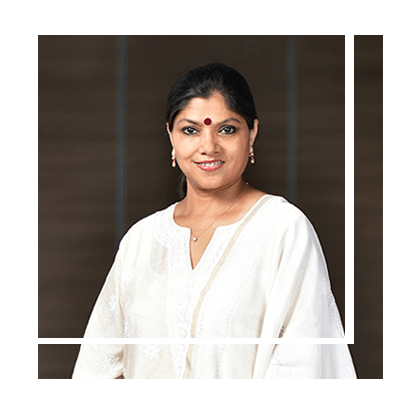 – “Access to energy is fundamental to the holistic development of mankind. Our aim is to impact the lives of people by providing access to energy through clean sources and help communities develop through high impact programmes.”

A strong advocate of equal participation of women in economic activities, Vaishali is also passionate about issues such as climate change, sustainable development and promoting women entrepreneurs and leaders. She is a regular speaker at international forums like the Climate Week NYC, California Governor’s Global Climate Action Summit, Clinton Global Initiative, and events organized by WEF, UNDP and United Nations Global Compact Network. She is a President’s invitee to Columbia World Projects – a high-level forum at Columbia University created to tackle major global challenges. She also serves on the President’s Advisory Council at Wellesley College and the Columbia Global Centre’s Mumbai Advisory Board.

Vaishali is deeply engaged with industry bodies, think tanks and educational institutions. She is a member of the Governing Council of the UN Global Compact Network India (GCNI) and Chairperson of their Gender Committee; Chairperson of South Asian Women in Energy (SAWIE) – a body set up under USISPF to promote diversity and gender equity in energy sector; Chair, CII’s Indian Women Network and Woman Empowerment Committee and a member of the Governing Council of the Vedica Scholars Programme for Women. Vaishali is also the Vice President, North, Governing Council of UNGCNI and Co-chair, Impact Future Project, Aspire Impact. She is also a member of the Advisory Council of the CII-ITC Centre of Excellence for Sustainable Development, Advisory Committee of the India Climate Collaborative and Global CSR & Philanthropy Committee, Della Group. Vaishali has also authored several opinion articles on a range of topics from sustainability to gender parity to CSR which have been published in leading Indian dailies, magazines, web portals and industry journals.

In October 2020, Vaishali was named among India’s 100 most important PR & Corporate Communication professionals and listed among Asia’s Most Influential Women in Renewable Energy by Solar Quarter magazine. Vaishali was felicitated for her outstanding contribution towards woman empowerment by CSR Journal in July 2019 and also recognized as being amongst India’s Top 25 Impactful CSR Leaders by the India CSR Network in April 2019. In 2019, CEO Today magazine conferred the Businesswoman of the Year Award on her for her achievements as a woman professional. She was also a National Finalist at the NITI Aayog Women Transforming India Awards 2018, finishing amongst top 2% of women from across India.

Vaishali has completed the Owners and Presidents Management Program from Harvard Business School and has a Masters’ in Public Policy from Columbia University’s School of International and Public Affairs, where she was an American Association of University Women (AAUW) scholar. After a decade on Wall Street and then London as an investment banker, she returned to India, where after several years in banking, she is now a social entrepreneur.